Year elected to Council: 1987
Year elected to Mayor: 1997
T: 902-895-3598
C: 902-956-1401
Bill Mills has been Mayor of Truro for 23 years.  He resides in Truro with his wife of 40 years, Phyllis.  Together they have seven children 5 girls and 2 boys along with seven grandchildren (and one on the way.)  Bill was employed in the Broadcasting Industry as Staff Announcer at CKDH Amherst for seven years. He moved to CKCL/CKTO/Cat Country Big Dog to finish his Broadcasting Career in Sales and Marketing after 24 years of Service in 2004.Currently employed part time at MBW Courier Truro on behalf of the Northern Region Health Authority.

Bill has served on almost every Committee in the Town, including Chair of the Truro Police Board, Chair of the Building Committees for the Library, Fire Station, Town Hall, Public Works Building.  Bill was awarded the Queen Elizabeth II Jubilee Medal as nominated by his peers, in February 2013 from the Federation of Canadian Municipalities in Honour of the contributions made to our Community and to all of Canada 🇨🇦.  Bill Currently sits on the Audit Committee, RECC Operating Board  And the Official Board of Colchester Christian Academy

Alison Graham was appointed to Councillor in Ward 1 in the October 2020 Municipal election. She has been living in Ward 1 for more than 15 years, where she raised her two children.

She volunteered with organizations in our community such as Third Place Transition House, École acadienne de Truro, Maggie’s Place, The United Way of Colchester County, the Canadian Cancer Society, and Heart & Stroke. Wayne Talbot was appointed to Councillor in Ward 1 in the October 2016 Municipal election. He graduated from Colchester County Academy in 1967, and then attended Dalhousie University where he played varsity football, basketball and track & field. Wayne graduated from Dalhousie in 1971 with a degree in sociology. He was employed with the New York Life Insurance Company for two years, and then spent 1.5 years working in community development with the Black United Front of Nova Scotia, before accepting a position with the Federal government as an Employment Counsellor in 1974. Wayne retired as the Director, In-person Services for Nova Scotia and Prince Edward Island in 2008 after 33.5 years of service. After retiring, he accepted a position as Project Coordinator for the African Nova Scotian Employability Table. Wayne is married to his wife, Amanda, and they have three grown children. He is an avid golfer, reader and community activist. Wayne has an extensive record of serving the community in a volunteer capacity on a number of boards.

Jim Flemming has been a resident of the Town of Truro since 1966. He became a member of the Truro Police Service in 1981 and served for 39 years (retired since June 2020). He has been married to his wife Christine for 39 wonderful years. Together they have three children and 5 grandchildren.

Bill and his wife Jean have lived on King St. for 37 years where they raised 5 children. Bill retired as Director of the Field Services Division at Perennia Food and Agriculture Inc. in August 2017.  Bill is a Certified Crop Advisor, a Certified Nutrient Management Planner, a long-standing member of the Nova Scotia Institute of Agrology and Agrology Institute of Canada and a Fellow of the Canadian Society of Agronomy. He has served on several provincial, regional and national committees concerning production and policy issues.Since leaving Perennia, Bill has taught at Dalhousie University where he is an adjunct professor, worked on a project for the Cumberland Business Connector and helped to develop a booklet of Best Management Practices to reduce greenhouse gas emissions in Canada’s forage and grassland production systems.In recognition of his work Bill received the Canadian Forage and Grassland Association national “Leader Award” in 2017. In 2018 Bill received an Honourary Member Award from the Dairy Farmers of Nova Scotia.Over the years Bill has coached minor baseball, was on the executive of a local scout troop, served as a church elder and helped manage the annual “Christmas at the Creamery” event.

Ward 3
Year elected to Council: 2016
T: 902-956-1406
Cathy was elected as Councillor for Ward 3 in 2016. Born and raised in Truro, she attended Cobequid Educational Centre and Mount Saint Vincent University. Cathy worked with the Government of Nova Scotia for over thirty-two years, with a diverse background in sport and recreation, cultural affairs, heritage, recreational facility development, natural resources, mediation and residential tenancy. She has always been an active volunteer and is a founding member of a non-profit association dealing with citizen concerns in the Ward where she resides. Cathy is a proud mother and grandmother who cares deeply about her community.

Ward 3
Year elected to Council: 2020
T: 902-324-8927
Juliana Barnard and her family moved to Truro from Montreal in 2003, and she quickly became involved in the community.  In her work with the provincial French-language school board, le Conseil scolaire acadien provincial (CSAP), she has helped create a province-wide program for school and community development, including cultural vitality, citizen engagement, and community partnerships.  She volunteered as a member and Vice-President of the Downtown Truro Partnership, the School Advisory Council of École acadienne de Truro, and is a founding member of the Living Earth Council, a local organisation promoting sustainable communities. She graduated from Stanford University in 1982, and has worked with community organisations in the United States, Mexico, Central America and Canada.

In her professional and volunteer activities, she has organized and facilitated training programs for youth and for adults, developed innovative cultural programmes, and has built dynamic and collaborative teams that are able to work creatively with complex challenges. As Councillor, she serves on the following committees:  Diversity Advisory Committee, Farmers’ Market Advisory Committee, Parks, Recreation and Culture, Rath-Eastlink Community Centre, and the Truro Industrial Development Society.  Juliana enjoys spending time with her family, taking long walks in Victoria Park, continually learning, and is a regular at the Farmers’ Market on Saturday mornings. She lives with her husband, Ivan Drouin, in Truro

Truro Town Council is broadcast live on Eastlink TV at 1:00pm every first monday of the month and can also be viewed live, or anytime, here. 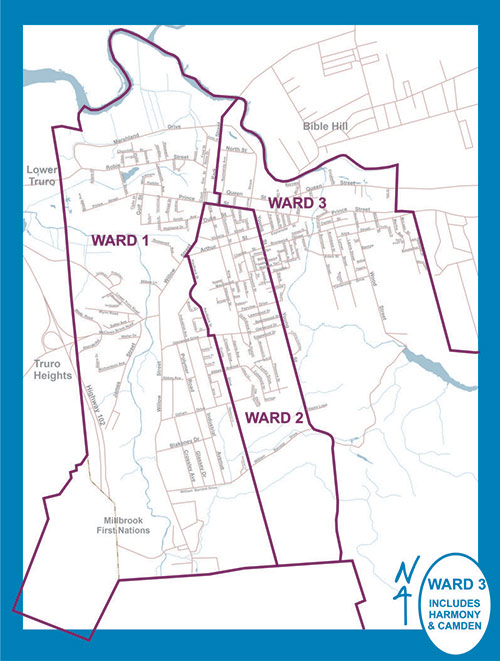